Microsoft blocks a 'mail storm' from replying all

Microsoft is developing a feature to protect all Reply to emails for Office 365 and Exchange Online to prevent email storms.

"Email storm" is a situation in which hundreds or even thousands of people respond to the same topic. This situation occurs when the sender forgot to leave the email address in the BCC (temporary copy) section, leading to the recipient repeatedly receiving irrelevant information, causing important emails to be missed. 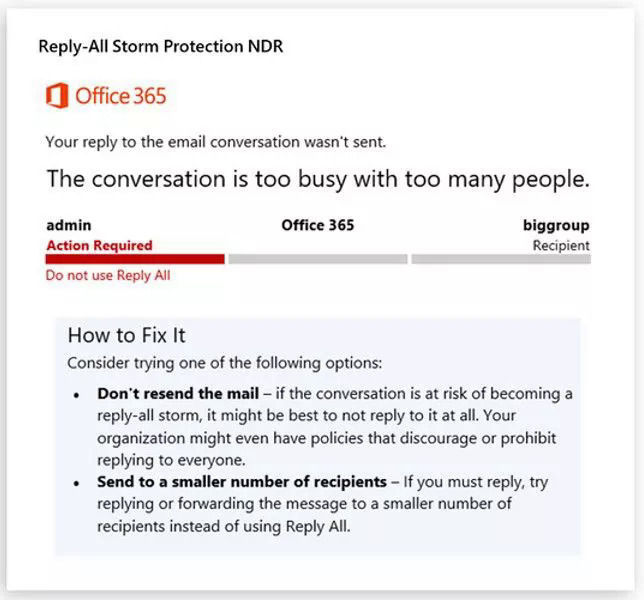 Security feature Reply to all to prevent "mail storm" has been applied by Microsoft.

"Email storm" blocking will apply first to large businesses and organizations. On the support page, Microsoft said the new feature will detect 10 emails responding to more than 5,000 addresses within 60 minutes.

"Email storm" has been a major problem for businesses for decades. According to the Guardian, many organizations and companies have encountered this problem, the most serious of which was the crisis at the British National Health Service (NHS) in 2016, when a technician sent a test message, sending over 186 million useless emails directly affecting 1.2 million NHS employees.

Microsoft was also involved in the "email storm" scandal in 1997, called the "Bedlam DL3 incident". At that time, about 25,000 people in the attached list were constantly sending and receiving emails, creating a chain of 15 million emails and 195 GB of traffic. This problem overloaded the Exchange mail server, forcing Microsoft to introduce later recipient restrictions.

Last year, a notice on GitHub triggered "email storms" to thousands of Microsoft employees. Or in March, many employees of this business were also "caught" in a quick response email stream, but the problem was resolved after 30 minutes.